“MOTHER OF THE MAID” at Moxie Theatre 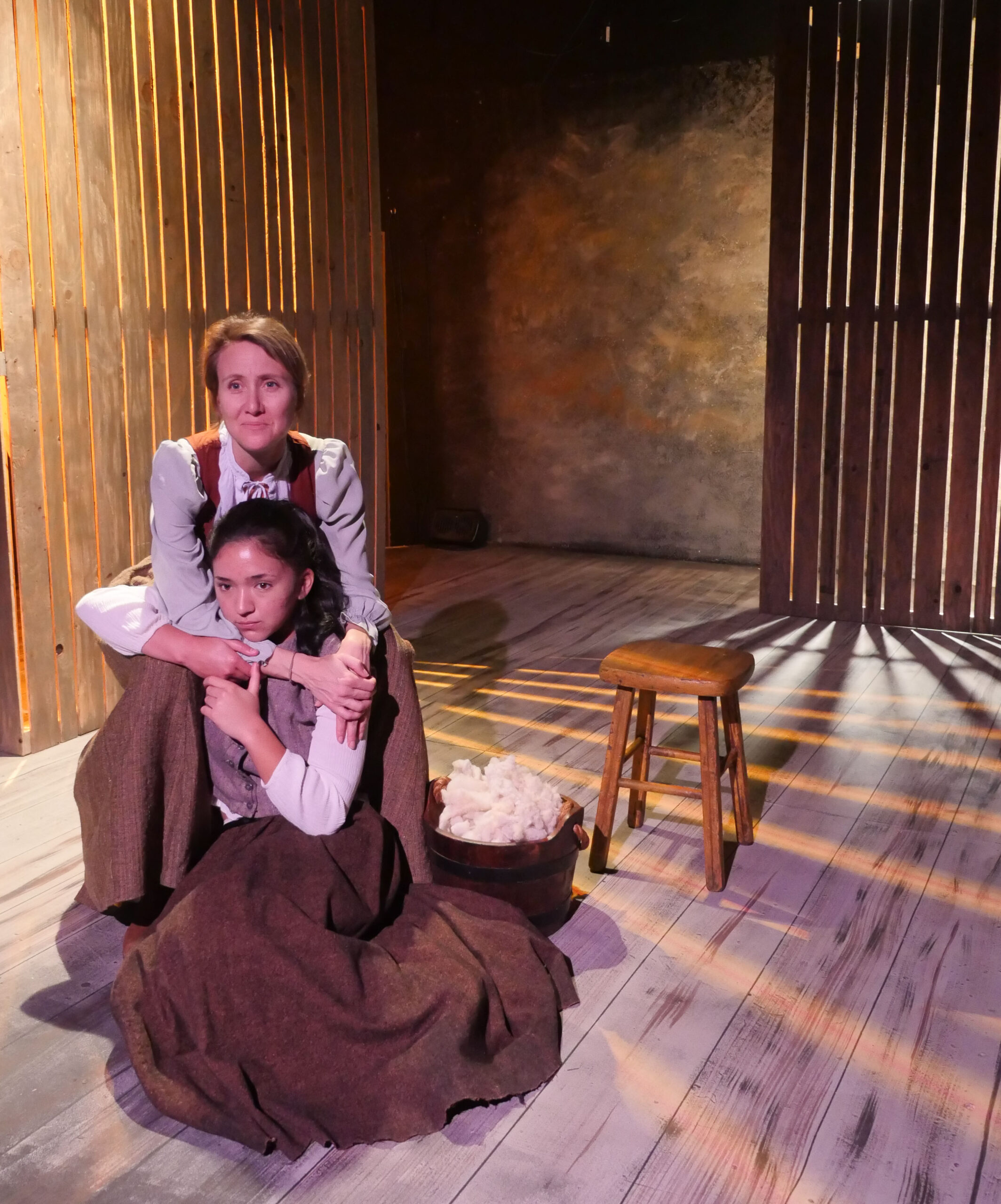 Mother’s Day weekend was the perfect time to see “Mother of the Maid” at Moxie Theatre — because it’s all about the ferocity of motherlove.

Playwright Jane Anderson had a brilliant conception with this creation that premiered at The Public Theatre in 2018 (with Glenn Close in the lead): tell the story of Joan of Arc from the perspective of her mother.

Who would know her better, having birthed her (she lost another baby girl, but says that “Motherhood is a numbers game, and you’re bound to lose a few before you’re done”), bathed her, wiped her nose, held her close, calmed her fears.

We’ve all read about the humble beginnings of saints, but we haven’t witnessed the daily details — like “picking the dung-balls out of sheep’s arses.”

The Arc family, as Anderson presents them, were 15th century peasant farmers living in Domrémy in northeastern France (the action begins in 1429). They didn’t consider themselves poor; they were able to feed their children. But they lived in something of a shack (Yi-Chien Lee’s nicely designed, wood-slatted structure is beautifully lit by Annelise Raquel Salazar).

In the play, we get a sense of their lives and relationships: father-son conflict, mother-daughter pushme-pullyou.

We also see what it might have been like to raise a strange, outspoken, stubborn but charismatic girl that hordes of Frenchmen were willing to follow into battle to stave off the English marauders.

And then, as her tragic story goes, she was captured by the Burgundians and sold to the English. Her countrymen turned their backs on her, allowing her to be convicted of heresy and burned at the stake as a witch. She was just 19 years old.

All because she had vivid visions of St. Catherine, who told Joan to lead an army and recover France from English domination.

Her devout mother, Isabelle (beautifully, modestly and compellingly played by Moxie co-founder and current artistic director Jennifer Eve Thorn), says she believes her teenage daughter, but also seems to think this might be a figment of Joan’s imaginative adolescent mind.

Joan’s father, Jacques (forcefully portrayed by Dave Rivas) beats her for it. Her brother (appealing Zack King; she actually had three brothers, but only one in the play) ridicules her, but then follows her into battle. On the day of her immolation, he was busy getting drunk — and he paid for his drinks with a lock of his sister’s hair.

The local priest, Father Gilbert (a semi-benevolent Mark C. Petrich, who also plays Joan’s Chamberlain at the court), was supportive — and then he wasn’t.

Despite her doubts, it was Isabelle who stood by Joan to the end —and beyond, walking 300 miles through rain, mud, rocks and a collapsed bridge, just to see her daughter at the castle of the Dauphin, the eldest son of the King of France.

It’s Isabelle who visits her in jail and washes her before dressing her in white for her burning.

And it’s Isabelle, the plain-spoken illiterate, who spends the rest of her life trying to vindicate her daughter and convince everyone, up to and including the Pope, that Joan was innocent of heresy and touched by God.

She didn’t live to see her daughter’s canonization (Joan didn’t become a saint until 1920), but her dedication to her role as mother was as uncompromising and unwavering as Joan’s commitment to her Creator and her patron saint.

The antithesis of Isabelle is Nicole, a Lady of the Court (excellent Sarah Alida LeClair), wealthy, educated, indolent, the mother of three privileged, spoiled daughters. She sympathizes with Isabelle, admires her, even washes her feet, but when it comes to helping her in her time of direst need, she’s completely ineffectual. She lacks the grit and indefatigable determination of the Arc women.

As Joan, Mikaela Rae Macias, a second year Theater Performance student at San Diego State University, is thoroughly credible in conveying Joan’s steadfast look, demeanor, sense of purpose and unswerving faith. But she tends to rush and jumble her words, making her utterances difficult to understand at times.

Sergio Diaz-Delgado rounds out the cast as an efficient Guard and Scribe.

Desireé Clarke directs with assurance. Courtney Ohnstad’s costumes are just right for the rich and poor, and the effective sound design (by Rachel MadCougall Le Vine) includes a humorous, subtle take on Cyndi Lauper’s “Girls Just Want to Have Fun,” a fine counterpart to the modern vernacular language of the play.

The conceit and the story are gripping, and we want to be fully immersed, but Anderson employs a dramatic device that serves to distance us from the otherwise riveting action.

Isabelle often (and her husband and son on occasion) steps center stage and addresses the audience in the third person (“Isabelle was this, Isabelle thought that”), taking us out of the story. It’s not clear what her objective was; Anderson is an award-winning writer for stage and TV, and she must know many ways to convey exposition. This one interrupts the flow of an otherwise enthralling piece of theater.

The focus of the piece is fascinating; the story is unbeatable. Chalk up another potent, absorbing production from the women-centered Moxie Theatre.