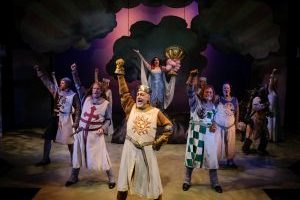 If you like ham and cheese, Cygnet Theatre is serving up a supersized sandwich, between thick slices of parody, harmony and silliness supreme. Lettuce just say, they’ve mustard a stellar cast for “Spamalot.” Round Table for two?

What else can you do but eat ham a lot when dealing with “Spamalot”? (officially, “Monty Python’s Spamalot”). You can also ham it up a lot, and say cheesy things. And believe me, they do.

The musical takes the 1975 film, “Monty Python and the Holy Grail,” several loopy steps further and higher over the top – if that’s possible. Actually, it was 40 years exactly before Python Eric Idle conceived the show, writing the book, lyrics and music, which was co-composed by John Du Prez. I guess the long gestation period paid off; the show garnered 14 Tony Award nominations, winning three, including Best Musical, in 2015. During its initial run of over 1500 performances, it was seen by more than two million people and grossed over $175 million. Who’s sniggering now?

Cygnet Theatre hopes to add to the millions of satisfied customers – but on a low budget, which suits the material just fine, since there’s so much base and below-the-belt humor.

What director Sean Murray saved in eschewing elaborate sets (scenic design by the irrepressible Sean Fanning, with endless, ludicrous, sometimes puzzling projections by Blake McCarty. Really, every word, scene or song does not have to be illustrated… in ani-motion!), he makes up for in cheap humor.

He pulled out all the stops for this one; every goofball, vaudeville, low-comedy shtick in the book makes an appearance – or two. (I even got a shoutout; with a wig that looks like my stripey hair, and my encomium to local theatermakers: “You ain’t chopped liver!”).

Everything you can imagine is thrown in, and everyone you probably know and love from the film is in the wacky mix, too: The Knights who say the deafening “Ni,” the cursing Frenchman (“I wave my private parts at you,” always a favorite of mine), the (dangerous but diminutive) Killer Rabbit, the Lady of the Lake AKA Guinevere (terrific Christine Hewitt, who brilliantly displays her magnificent, wide-ranging vocal chops and sassy manner), and of course, King Arthur and his ragtag band of boobs (um, knights). Speaking of which, Stormy Daniels  and Taylor Swift even get a mention. (Darrell  Issa, too… but why?)

Some knights are doltish (David S. Humphrey, hilarious as Sir Galahad, and others); some are cowardly (James Saba as the pants-soiling Sir Robin, very funny, but consistently under-miked, so nearly every clever word of one of the show’s best songs  –“You Won’t Succeed on Broadway” – is lost); and some are gay (Bryan Banville, side-splitting in multiple roles, including the delicate dude-in-distress, Sir Herbert, who’s rescued by hunky Evan White as a ripped, prancing Lancelot.

Murray reprises the role he played so deftly at Moonlight Stage Productions in 2014. This being his turf and domain, he is fully in command as King Arthur, who is attended by a talented but devoted and underappreciated servant, Patsy (comically played by Jonathan Sangster, with his clip-clopping coconuts).

It’s not all fun and games. (Wait! Yes it is!); there’s also a twisted/mythical plot.

First, Arthur must amass his knights. Then, God gives them a quest: to find the Holy Grail, the chalice used at the Last Supper. When Arthur describes it as “a vessel,” one knight wonders whether the Last Supper was a dinner cruise.  They must brave an “expensive forest,” unearth shrubbery and battle Bad Guys to get what they came for. You’ll get what you came for, too

The singing and dancing (cute, lively choreography by Katie Banville) are excellent, and the 6-piece band (under the expert musical direction of Terry O’Donnell), is superb.

The costumes are phenomenal and constantly changing. Where they came from is unclear; Sarah Palmer Marion is credited as costume coordinator/dress. Great job on the latter – some of those costume/makeup/Peter Herman-wig changes are incredibly fast.

The lighting (Chris Rynne) is also rapidly changing, and the props bear mentioning, too (Bonnie Durben has outdone herself, though the Black Knight’s dismembered limbs were a little sluggish in detaching in the performance I attended).

It’s a big schmaltzy show, downsized for a small theater, but in imaginative, often ingenious ways. It’s loopy, loony, zany, madcap, screwy, wacky, nutty, goofy and any other off-the-wall, asinine-sounding adjective you care to add. When it’s well done – as it is here – it’s irresistible.

Hold the mayo; spread the laughter.