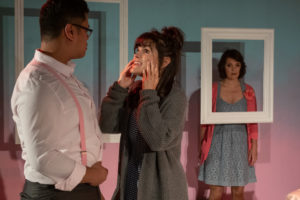 There’s an almond-shaped mass of gray matter in your brain called the amygdala, that’s responsible for emotions.

As one character puts it in his “defense of melancholy,” it’s “a disappearing emotion.” We talk about depression all the time, but melancholy – often sentimentalized in song — seems to have gone out of style.

Tilly is fairly drowning in melancholy. Her boss at the bank has sent her to a psychiatrist, the self-proclaimed “Unfeeling Lorenzo.” But he, like the others in Tilly’s life – her tailor, her hairdresser, and the hairdresser’s lover – all fall utterly in love with Tilly and her seductive melancholy.

But when Tilly becomes inexplicably and relentlessly happy, they all turn away, wallowing in their own sadnesses.

In part two of this brief intermissionless play, things take a strange turn. The hairdresser is so distraught, she retreats into a shell – literally. She actually becomes an almond.

This quirky absurdist play carries a message about allowing  yourself to experience a full range of emotions, and learning to maintain a balance between emotional extremes. On a deeper level, it’s about the fragility of the human condition, and the importance of interaction, friendship and love.

But the form of this wacky bipolar expedition might make your head spin. Just go with it and let the surreal whimsy flow over you. The excellent cast at InnerMission Productions is certainly taking it seriously.

Their staging is amusingly fanciful, but also precise and grounded. Tautly directed by Carla Nell, it features a marvelous performance by Hannah Logan as Tilly, who displays an eye-popping array of emotions.

The mournful sound of a cello, played by cast-member Vanessa Dinning, underscores much of the action. The set consists of suspended frames that serve, metaphorically, as both windows and mirrors: looking outside and within.

If you can get past the nuttiness, and the sappy ending, you might see that, between the silly and the sincere, the lyrical and farcical, the play is exploring our emotional lives, and how we and others deal with them.