“LAUGHTER ON THE 23rd FLOOR” at North Coast Repertory Theatre 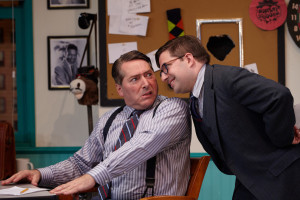 Imagine being in a room with Mel Brooks, Woody Allen, Carl Reiner, Larry Gelbart and Sid Caesar. That’s a boatload of comic genius.

The young Neil Simon couldn’t believe his luck, landing a job as a junior writer for “Your Show of Shows,” the most popular TV comedy-variety program of the early 1950s.

In 1993, he immortalized the experience in the hilarious comedy, “Laughter on the 23rd Floor.” Amid the writing and fighting, the nonstop one-liners and the unfettered lunacy, one sentence sums up the experience: “Maybe we’ll never have this much fun again in our entire lives.”

Of course, to protect the guilty and neurotic, Simon changed all the names and put a total of nine crazy comics in that office in the NBC Building in New York.

Lucas, Simon’s stand-in, is our shy guide and narrator. His boss is the addictive, unhinged star of “The Max Prince Show.” Val and Brian and Kenny and Helen are the other writers – yes, there actually was a woman, who had to act like one of the boys – in verbal agility, assertiveness and foul language. And then there’s Ira Stone, a hypochondriacal riff on Mel Brooks’ manic wackiness.

Set against a backdrop of McCarthyism, the storyline concerns the show being gradually decreased and diminished, as TV expands into Middle America, where “sophisticated humor” isn’t appreciated as much as sports and quiz shows.

But really, this play is so relentlessly funny, despite its forays into political and personal outrage, that it would be easy to just watch and listen to these kibitzers all night, even without any plot.

North Coast Repertory Theatre mounted the show, to sellout audiences, 20 years ago. This incarnation is also destined for a long, successful run.

Under the direction of stage and film veteran Tom Markus, this is an all-star cast. Every one of the roles is a gem, and these consummate comic pros bring enormous verve, humor and impeccable timing to the production. The physical comedy is unbeatable.

This is the comic relief you’ve been hungry for. Don’t you dare deny yourself.