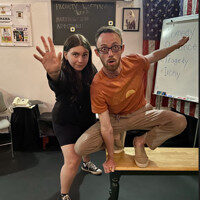 Okay, I’m not a gamer. But my husband is. (He’s also a major theatergoer).

And we both had trouble figuring out exactly what was going on in “LARPing,” the world premiere produced by the 10 year-old Trinity Theatre Company.

Britta is a Dungeons and Dragons DM (Dungeon Master). Her fellow player is David (or is it his twin, John?).

There is also LARPing (Live Action Role Play) where, instead of sitting at a table with a map and multi-sided dice, they don costumes and take on roles of the questing characters.

It’s hard to tell which part of the 60-minute play — by Philadelphia-based Brian Grace-Duff and Greg Romero — is real and which is imagined. Is that the point?  That people deeply immersed in gaming/LARPing lose the ability to distinguish fantasy from reality?

Are Britta and David in a real relationship (though she won’t have actual sex with him)? Or is he just a figment of her imagination?

Then there’s Jenny, a DJ at a strip club. David (or John?) comes in at off-hours, to practice and perfect a strip routine for his girlfriend.

Is any of this real?

There is a Truth or Dare segment, but even here The Truth is difficult to discern.

Two of the characters (I kept losing track) celebrate their non-normalcy (“F***k Normal!”, they shout repeatedly.

Under the direction of Eddy Lukovic, an actor making his professional directorial debut, the four characters are not sufficiently distinguished. (Is this the point?)

Actors Kimberly Weinberger and Jonny Taylor are working hard at all this playing (games and double characters). His moves are great. They both could use some singing assistance. They’ve gotten impressive help from Intimacy Consultant Kandace Crystal.

Kudos to all for giving this new work a go. It’ll be interesting to see how it evolves over time.