“JUNK” at the La Jolla Playhouse 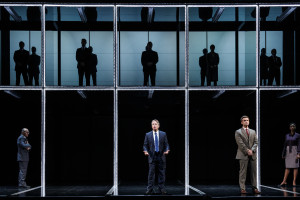 “This is a story of kings,” we hear at the opening of the world premiere at the La Jolla Playhouse. “Or what passes for kings these days.”

These potentates, like many before them, are embroiled in a battle over bucks. One of the many provocative questions posed in “Junk: The Golden Age of Debt,” is “When did money become a thing?” Perhaps it always was… but somehow, it seems a little more fetishized these days… and those days back in the ‘80s.

Pulitzer Prize-winner Ayad Akhtar happens to be the most produced playwright in America this year. All his plays are provocations. This one would be a terrifying cautionary tale, if it weren’t historical and based in fact. And if the cautions had only been heeded three decades ago. Instead, we’re right back where we were then.

The year was 1985, and we’re watching the evolution of the junk bond era, the moment when debt became an asset, when hostile takeovers of companies were accomplished by borrowing against the company itself.

It was a sleazy business conceived by millionaires and billionaires, in their effort to earn even more – at the expense of many little guys along the way, especially those in the manufacturing sector. As Akhtar so compellingly shows, ultimately, everyone, at every level, has a price – from journalists to politicians, businessmen to wily women.

More than 20 roles are played by 17 forceful actors, under the taut direction of Doug Hughes. The expert, cubicle-inspired design is as sleek and shiny as the deals. The ensemble is outstanding, though there isn’t a likable character in the bunch; they’re all amoral and on the take. One of the fun parts of the deliciously, perniciously intense, fast-paced 3-act drama is trying to figure out who the real-life counterparts of all these slimeballs were – and just how much literary license Akhtar has taken.

Those headline names start coming back – some pretty thinly disguised: Michael Milken (here, Robert Merkin), Ivan Boesky (Israel Peterman), and then U.S. Attorney Rudolph Giuliani (Giuseppi Adesso), gunning for his mayoral post. It’s a little less fun to go home and look up how they each bought their way out of their illegal/immoral dealings.

So “Junk Bond King” and mastermind Milken only wound up serving two years – and is now a major philanthropic supporter of medical research, with a current net worth of over $2.5 billion. In the ‘80s, Time Magazine called him “America’s Alchemist.” In 2004, Fortune Magazine dubbed him “The Man Who Changed Medicine.”

The Big Boys didn’t seem to suffer much. And as Akhtar intimates, the takeover raids of the ‘80s led directly to the mortgage crisis and real estate bust of the 2000s – a story effectively told in the 2010 book and 2015 film, “The Big Short.”

So, what’s the takeaway? Have we learned? Have we changed? Apparently not. There’s more than a whiff of Milken and “Junk” in the history of Donald Trump’s business dealings —  without the philanthropic overlay. Clearly, the beat goes on. But thank goodness for authors and playwrights and filmmakers who make sure some of us don’t forget.