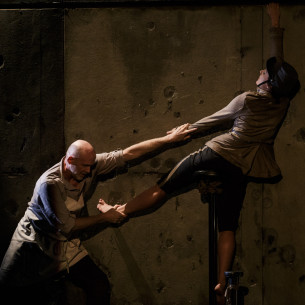 More American lives were lost in the Civil War than in any other hostility since. Though technology — both medical and military – has advanced enormously, the problems of field injury, survival, and adapting in the aftermath remain remarkably unchanged.

This is among the many points being made by conceiver/director and co-choreographer Liz Lerman (a MacArthur “genius” grant recipient), in “Healing Wars,” a non-linear, multisensory dance/theater piece that kicks off the La Jolla Playhouse’s second, weekend-long Without Walls (WoW) Festival. It’s an auspicious beginning.

Lerman is particularly interested in the intersection of art and science, and that’s underscored in this production, which is currently touring the country.

Before the performance officially begins, the audience is led backstage, in small groups, through labyrinthine passageways, to witness some of the narrative elements of the Civil War stories, some static, some danced, from a new enlistee to letter-writing nurse Clara Barton to a freed slave on burial detail, which some considered a sacred task. The final vignette is a contemporary conversation with a Veteran amputee, who goes on to perform with the dancers – with and without his artificial limb.

We meet, among others, a surgeon, who tells about old and new medical developments and laments his losses in the operating room and his impotence in the field; and a graceful, ethereal Spirit Woman who escorts the dead to the next world. We hear about the 400 females who disguised themselves as men to fight in the Civil War, and about the ever-present inadequacy of post-combat government services.

Interspersed with the text, which was co-curated by Lerman and actor Bill Pullman, whose wife is part of the eight-member ensemble, we watch angular, often gut-wrenching dance moves, backed by equally discomforting projections that feature quotes (historical and recent), video from current wars, and a field of flowing wheat, littered with bodies, like so many discarded husks. This is not for the faint of heart.

With more narrative than dance, there’s enough information to leave you thinking long after – and grateful to be out of the line of fire.