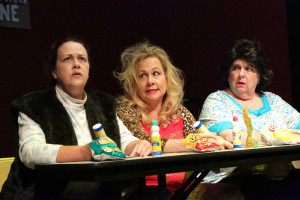 People claim to be ‘nice’ or ‘good,’ but there’s an undertone of anger, resentment and malice that runs through just about everyone – from the Bingo ladies of the low-end, dead-end Southie part of Boston to the reproductive endocrinologist in Chestnut Hill, who got out of the ‘hood and moved up. Maybe tough environs breed tough survivors.

“Good People” is a chilling tale of haves and have-nots – and holding onto your soul.

Maybe those down-and-out folks need to admit to playing some role in the choices they’ve made and the lives they lead. Maybe the wealthy former Southie needs to acknowledge the role luck played in his escape.

At OnStage Playhouse, director James Darvas chooses to start the proceedings with a prolonged fantasy scene, showing middle-aged Margie and the doctor, Steve, when they were young and carefree and together. That was 30 years ago – and the scene isn’t necessary.

When the actual script first introduces us to Margie, she’s getting fired – by her friend Stevie – from her job at the Dollar Store. And facing eviction from her landlady/Bingo friend Dottie. Her repeated lateness to work was primarily due to the caregiving needs (erratically provided by Dottie) for her adult developmentally disabled daughter.

Margie’s desperation, grounded in a neighborhood with little hope, no available jobs and few exit routes, only grows over the course of the often funny but grimly intense play, which takes several wonderfully unexpected and destabilizing turns. Lindsay-Abaire (“Rabbit Hole,” “Fuddy Meers,” “Kimberly Akimbo”) always seems to have his pulse on the times… and the ability to write timeless dramas about our fears and nightmares.

Darvas, a muscular director, has cast wisely, and keeps the pace lively. The Boston accents are variable, but the acting is strong and credible. Kaly McKenna is perfect as Margie, down on her luck and claiming that she didn’t have any choices… or opportunities. But the one big choice she did make might have changed her life. Or not.

Chris Tenney is spot-on as Mike, sporting all the arrogance and entitlement of a self-satisfied doctor who never wants to look back. Dee Kelley and Michele Dixon are hilarious, each a “mouthie from Southie” in her own barbed, screwball way. Ray-Anna Ranae is aptly well-meaning but seething with bitterness as Mike’s younger wife. And Markuz Rodriguez subtly plays Stevie, who might be the only real “good people” in the story.

The play has a number of ‘How would I have dealt with that?’ moments – which makes it potent and thought-provoking. And this production brings it vibrantly to life.  Catch it while you can.