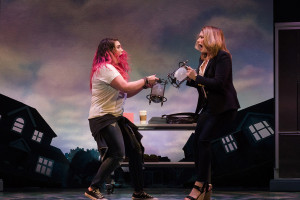 It’s a wonderful old adage: You never really understand someone till you’ve walked a mile in their shoes. Or, according to a Native American proverb, in their moccasins.

That’s the premise of “Freaky Friday,” where a battling mother and daughter are forced to inhabit each other’s bodies – and lives — for 24 hours.

From the Mary Rodgers children’s novel, Disney created two film versions of the story – in 1976 and 2003.

Now, in association with the Cleveland PlayHouse and Houston’s Alley Theatre, the La Jolla Playhouse is presenting a new musical by the same name, also produced by Disney. The creative team boasts heavy-hitters, with music and lyrics by the Tony and Pulitzer –winning team of Tom Kitt and Brian Yorkey, who won their acclaim for the dark musical, “Next to Normal.” The book is by Bridget Carpenter of TV’s “Friday Night Lights,” and the production is helmed by Playhouse artistic director Christopher Ashley.

The energy is high, almost frenetic. The cast is excellent, with Heidi Blickenstaff giving a knockout performance as the mother.

It’s fun and likable, the score is pleasant and the choreography, by Sergio Trujillo, is terrific. The band is superb.

But in the end, it’s superficial and shallow. There’s no edge, and no attempt to posit broader implications. At a moment when we need that moccasin message more than ever, the show is just not quirky enough or incisive enough for a one-note setup and a nearly 2½ hour run-time.

A few plot-points aren’t sufficiently explained, and there are platitudes galore. But there are some strong numbers, like “What You Got,” “Busted,” and the slightly offbeat “Women and Sandwiches.” More like that, and a shorter first act, would help. Also, fewer stereotypes and movie tropes – the Asian sidekick, the African American cop, etc.

For mostly mindless, frothy fun, it’s a winner. The production is impeccable. But these creative talents, especially the composer and lyricist, are capable of diving so much deeper, and hitting raw nerve. A little more nerve would serve this musical well.