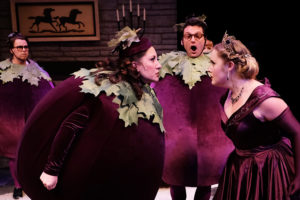 For 42 years, Lamb’s Players Theatre has celebrated the season with a “Festival of Christmas.”

Resident playwright Kerry Meads has written a sleigh-ful of plays, highlighting the warmth, heart, song and spirit of the holiday.

There’s almost always a plan that goes horribly awry, often due to a snowstorm. Nerves are frayed, tempers explode, last-minute substitute performers save the day — and music conquers all.

“It’s Christmas and It’s Live!” was first presented in 1990, and five times since.

Set in a New York City radio studio in 1952, the story features an apoplectic director who nearly loses all reason when a blizzard keeps most of his staff and his guest stars from his annual live Christmas Eve broadcast, “Festival of Pop Song,” hosted by a  smarmy, piano-playing lounge lizard.

The winners of an amateur talent contest , a nerdy choral group from Dubuque, Iowa, manages to arrive — just 4 Hours before showtime — and they’re forced to wiggle into all the costumes, learn the choreography, and portray the toothpaste sponsor’s tap-dancing teeth, as well as bulbous purple Sugar Plums.

Things go from bad to worse, technically and otherwise, but the trap door is an endless source of amusement. Anxiety peaks, with the arrival of the sponsor’s demanding, diva wife — and her little dog, too.

In the midst of the mayhem, the cast manages to wax nostalgic, salute the troops in Korea, tell the story of Christmas, pair off in unlikely matchups, and sing glorious renditions of carols and hymns. The singing is always the best part of the otherwise mostly pedestrian, always family-friendly Christmas shows at Lamb’s.

This time, many of the songs are performed a capella, in wonderful multipart harmony. The ensemble is magnificent, each quirky character getting a chance for a solo and the spotlight. They’re all strong-voiced, comical and entertaining, separately and together.

You’re bound to feel warm, fuzzy and nostalgic. You’ll also find that, as intended, the good will is infectious.