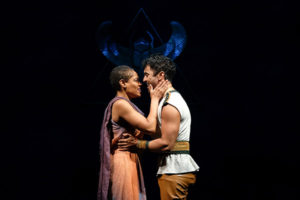 Okay, first let’s tackle the elephant in the room.

Not a random metaphor, since the first time I saw the beloved Verdi opera, “Aida” (at age 12) was at the 2000-year old Baths of Caracalla in Rome. During the Triumphal March, there were actual live elephants onstage. It was magical, majestic, awe-inspiring.

“Elton John and Time Rice’s Aida” is a horse of a different color (there were horses on that ancient stage, too).

Frankly, despite its Tony awards and popularity (though it isn’t produced that often), it’s not a great musical. It does tell the heartbreaking story of Aida, the Nubian princess enslaved by the Egyptians, who falls for her captor, Radames, who is equally besotted. It’s a forbidden passion that brings tragedy to both of them. But the glitz and glam and sometimes bombastic pop-rock score overpower the poignancy of the narrative, which is all about the power of love.

That said, I’m happy to report that Moonlight Stage Productions is offering an outstanding production of the 2000 Disney-produced work, which was written by John (music) and Rice (lyrics), with a book by Linda Woolverton and Robert Falls & David Henry Hwang.

Under the assured direction and superb choreography of John Vaughan, the story is clarified and more focused. The bookending museum scenes are more intriguing than distracting. And the voices are marvelous, backed by a robust 14-piece orchestra that sounds considerably larger (Lyndon Pugeda is musical director and conductor).

Daebreon Poiema, who was a powerhouse in “Sister Act” at Moonlight last year, here forsakes the wild abandon of Delores Van Cartier to assume the beautifully self-possessed dignity of the Nubian princess. Her voice soars, even though she’s forced by the pop opera’s style to do that over-embellished “American Idol” manner of singing, with six extra notes jammed into every tone. Sigh. But her stateliness, her ramrod-straight posture and her reluctant, ill-fated but inexorable love for the handsome Radames, is compelling and heart-rending.

As the object of her affection, Richard Bermudez (displaying his six-pack abs and chiseled arms whenever possible) is pretty irresistible. He may too often take a modern, slouchy stance, and tilt his head sideways (unbecoming a fierce leader and warrior), but his singing is superb, and his physical interactions with Poiema are tender, passionate and blistering.

As Radames’ father, Zoser, Bill Ledesma brings a dark, devious foreboding and a deep, rich baritone. And Terrance Spencer is delightfully playful (and strong of voice) as Radames’ informant and aide-de-camp, the Nubian Mereb.

Bets Malone is forceful as the Princess Amneris, daughter of Pharaoh and betrothed of Radames. An airheaded, bling-besotted Valley Girl-type at the outset (that would be the Valley of the Kings, presumably), she comes into her own when she realizes that her beloved is smitten with the very slave he gave her as a gift. Malone starts and ends the evening with “Every Story is a Love Story,” and she puts all her vocal power behind it.

The score is very tricky. It requires a rock sensibility and a sometimes mind-boggling range, but this cast delivers, with an excellent backup ensemble of 22. The performers playing the secondary characters are less effective and present less fully-realized individuals.

The choreography and dancing are excellent, with stylized, martial arts moves for Zoser’s black-clad ministers and African-inspired moves for the Nubians. Commendably, the cast is almost entirely composed of people of color.

The rented sets are aptly colossal, huge panels with a modern, metallic sheen coupled with Egyptian imagery and projections. The costumes (also obtained from Music Theatre of Wichita) are colorful, glamorous and constantly changing.

So, for Elton John fans, his musical flavor (and piano-playing) are evident throughout. For opera fans, well, Verdi it isn’t, but you have to broaden your mind and approach it as a totally different animal, albeit with a familiar story. And for musical theater devotees, there’s plenty in the acting, dancing, singing and score to give you a thrill.

An auspicious beginning for Moonlight’s 37th summer season. For once, a standing ovation was well deserved.