“DEAR JACK, DEAR LOUISE” by mail from The Old Globe 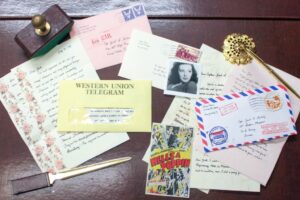 If there’s one thing the pandemic has taught us, it’s how endlessly inventive, resourceful, resilient and remarkable the theater community is.

Hard on the heels of the Zoom readings and concerts came audio plays and imaginatively and effectively filmed productions, mostly shot onstage in an empty house. There have also been experiential theater pieces of various types.

And now, along comes a new twist from The Old Globe: an immersive, ongoing presentation that comes directly to your door, one (or more) letters a week for six weeks.

In “Dear Jack, Dear Louise,” we meet the couple at the same time they meet each other. Their parents have set them up, but they’re total strangers, situated 3000 miles apart. The distance is about to increase.

It’s 1942. Jacob (Jack) Ludwig is a military doctor, an Army captain stationed in Oregon. Louise Rabiner is an aspiring musical theater singer/dancer living in Brooklyn, praying for Broadway. Their temperaments couldn’t be more different. On paper, at first he’s dry, taciturn and reserved; she’s passionate and ebullient. But both love what they do.

Over the course of four years, as their pen-pal romance evolves, he’s shipped overseas, and becomes more open, engaged and emotional. They both hope they can meet some time soon. He hopes for a leave to come to New York, but then he gets further embroiled in the war.

And then a telegram comes. (It’s actually not the only one, but just the sight of that first one is unnerving).

There are many things that make this an ideal experience for our times. The separation of loved ones. The difficulty of carrying on a long-distance relationship. The sad loss of the art of hand-writing or typing letters that endure. And of course, the anxiety of political/military conflict, and all that entails — the fear, uncertainty and heartache.

One more aspect of this particular theatrical endeavor makes it unique.

These are the actual letters written by the parents of the playwright, the prolific, Tony Award-winner Ken Ludwig (28 plays and musicals, translated into more than 20 languages, presented in over 30 countries, and performed somewhere in the U.S. every night of the year).

Ludwig is a San Diego favorite; his “Baskerville” and “Robin Hood” were given ingenious productions at The Old Globe. Other local theaters have presented his two-time Tony-winning “Lend Me a Tenor,” as well as “Moon Over Buffalo,” “The Fox on the Fairway,” The Game’s Afoot,” “Leading Ladies” and “Crazy for You” (he wrote the book that accompanies the George and Ira Gershwin score).

The genuine and highly personal factor ramps up the poignance of this piece. I kept forgetting it was ‘the real thing,” and worried that the relationship wouldn’t pan out, or that one of the pair wouldn’t survive the war. But then, of course, we wouldn’t have the great farceur, Ludwig, a graduate of Harvard University (where he studied music with Leonard Bernstein), Harvard Law School and Cambridge University.

Originally conceived as an epistolary play, which premiered at Arena Stage in Washington D.C. in 2019 (conceived by Teresa Sapien), the piece was nabbed by The Old Globe and turned into something deeply personal, thanks to the Globe’s first-rate Properties Department, which made the envelopes, stamps, postmarks, stationery, Western Union telegrams and enclosed photos look completely authentic.

There’s humor here, too, along with the ache and sorrow of separation. There’s also commendable courage and commitment, both by the correspondents and by their son. What a terrific tribute, and a heartfelt, heartwarming reminder of the best of us and the best we could be, even in the worst of times.