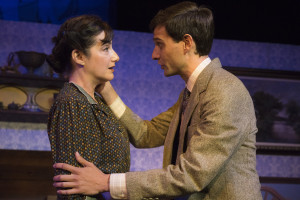 “Awake and Sing!” has a little of everything, as the eccentric Berger family struggles through the Great Depression.

Three generations, plus assorted hangers-on, are crammed into a small Bronx apartment. Grandpa Jacob is the book- and music-loving Marxist, who decries rapacious capitalists like his self-satisfied son Morty. Jacob’s indomitable daughter Bessie just wants what’s best for everyone – as long as she gets to say what that is, ignoring the entreaties of her children and her ineffectual, milquetoast husband.

But Bessie’s kids want more. They want a life of their own. They want to pursue their version of The American Dream.

Hennie gets married off to Sam, an immigrant who repulses her. Moe, a no-nonsense, Mafia-like sharpy, has loved her for years, and promises her more.

And Ralph, the only Berger with real chutzpah, the only one who really listens to and appreciates his grandfather, wants love and success on his own terms.

Arguments are propounded, compromises are made. There’s obvious suffering in this loving but discordant clan. Still, the 1935 play, considered the masterwork of Clifford Odets, ends on a positive note, with hope for the younger generation.

The dialogue and most of the New York accents are convincing. The costumes are period-perfect. The lighting and sound provide subtle support. The scenic design, also by Kurner, captures the time and cultural sensibility, even including a clothesline of laundry outside the cramped apartment.

Only two figures, dimly lit above the playing space, remain enigmatic. One is a musician; the other a writer, but their relationship to the action is opaque.

Most important, the message of the drama remains relevant. Don’t get bogged down in philosophy or obligation. Don’t be numbed into somnambulance by your social/political/familial situation. Rise up! Awake and Sing!