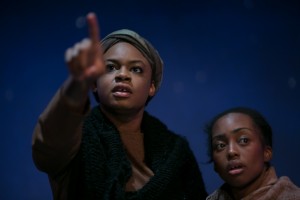 The country is deeply divided – racially, geographically and economically. Everyone is on edge. War is still raging, and there’s a noticeable lack of peace on earth and goodwill toward men.

Sounds very 2015. But Paula Vogel’s drama with music, “A Civil War Christmas,” is set in 1864. On this fiercely cold Christmas Eve, we get a glimpse of multiple characters, both real and fictional, from the celebrated to the obscure, black and white, slaves and freemen, devils (like John Wilkes Booth) and do-gooders (like Walt Whitman). There’s even a flirting Southern horse and Northern mule, who court with a “Don Giovanni” aria. Ultimately the strands of the many stories intertwine, creating a multi-colored tapestry of America – then and now.

All this is accomplished at Diversionary Theatre by a versatile cast of nine playing numerous roles, deftly directed by Kim Strassburger, with musical direction by Tim McKnight and fine fiddling by Kristopher Apple. The 2008 play works well in a bare-bones concert version, backed by the Encore Vocal Ensemble, which helpfully supports the few actors are who aren’t strong singers. With just a scarf or hat, they make magical character transitions.

We meet Abraham Lincoln, brooding over his second inaugural address. And his manic-depressive wife, Mary, along with her seamstress and confidante, former slave Elizabeth Keckley. There’s a peace-loving Quaker soldier and a dying Jewish one. A young runaway slave separated from her mother; an angry Southern boy itching to fight. A black Union sergeant who vows revenge on the Southerners who kidnapped his wife.

A sense of loss and isolation suffuses every character. Several ghosts appear. And songs are sung: carols, spirituals and Civil War anthems. Despite the bleakness, the holiday spirit prevails: Booth is thwarted (at least for a while), and forbearance replaces retribution.

There’s an overall semblance of unity at the end, but it feels tentative, provisional. As fanciful as the piece seems at times, that uncertainty feels real.

We’ve always been a country of hope. And “the hope of peace,” we’re told more than once in this play, “is sweeter than peace itself.” Here’s to the endurance of that red-white-and-blue optimism.