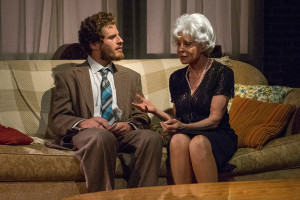 A narcissistic young man drops into his grandmother’s Greenwich Village apartment at 3am, with backpacks and bicycle in tow.

On his long-planned cross-country cycling trip, he had a traumatic experience. Then, when he arrives in New York, his girlfriend breaks up with him. He’s too insular and self-involved to talk about any of it, or to notice that his grandma is having trouble with her hearing, her friends dying off and, most distressingly, her frequent inability to retrieve the words she wants to say.

Not only does Leo amuse himself on Vera’s money, he makes her promise not to tell his mother where he is. He’s been out of touch with everyone.

Vera takes him in and barely criticizes or chastises him. She accepts him, and hopes he’ll fix the things that need fixing around her apartment (he says he will, but he doesn’t). She’s been on a journey, too, of the interior kind, and has experienced her own trauma. They get under each other’s skin at times. But after a few weeks, they begin to adapt, and to connect.

Finally, Leo reveals his story to Vera, and he starts to show the faintest signs of empathy and maturity.

That’s pretty much it for plot in Amy Herzog’s intimate drama, which won an (Off Broadway) Obie Award for Best New American Play of 2012, and was a Pulitzer Prize finalist in 2013.

Like the protagonists, it gets under your skin. These are such credible, well-defined characters, and the situations feel so achingly real, that you feel a bit voyeuristic in watching the confidential interactions.

There are no resolutions. Crises and conflicts arise, but cannot be wished away – or run away from (Leo’s inclination). Aging is inescapable, and so, one hopes, is the impulse to grow up and take responsibility.

Connor Sullivan superbly captures the New Age, Earth-loving, self-described “hippie” sensibility of Leo: intense, buried inside himself, an outdoors kind of guy who relishes Nature, to which he seems to relate better than people.

Jill Drexler brings just the right mix of political certainty (her late-husband was a well-known activist and writer) and personal insecurity, as she tries to cope with her aging, her word-finding problems and her diminishing contact with the outside world.

They’re both in need of help and support, and in their fumbling, awkward way (neither wanting to ask for assistance), they provide it for each other.

As Bec, the erstwhile girlfriend, Michelle Marie Trester has an apt sense of resentment, regret and self-possession. Yumi Rossin plays the one-night-stand, Amanda, to the hilt, antsy, sexy and turned on… until she’s turned off.

Herzog’s writing is spare and genuine. She gives us a lot, but it feels a bit like a teaser. We want more. Even if she’s not following the classical, Aristotelian principles of drama, we still long for a little bit of closure. Yet, in her dogged pursuit of verisimilitude, all we’re left with are loose ends. But then, life is like that sometimes, right?