“ONCE” from CCAE Theatricals in Escondido 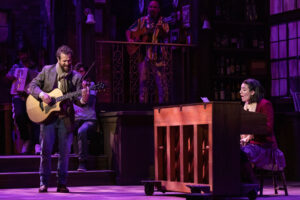 VENUE:  CCAE Theatricals at California Center for the Arts-Escondido

Once a young guy and girl came together. They were from different cultures and backgrounds. They’d both known great love and loss. They were instant soulmates, emotionally, artistically and personally. They touched each other’s lives, made beautiful music together. And then they went their separate ways.

That’s sort of the story of the creators of the score for the 2007 Indie film, “Once” (written and helmed by Irish director John Carney) and the 2012 musical of the same name, which won eight Tony Awards, including Best Musical and Best Book of a Musical (by Irish playwright Enda Walsh). Their signature number, “Falling Slowly,” won the Oscar for Best Original Song.

Like the characters they played in the movie, Glen Hansard is an Irish singer-songwriter and Markéta Irglová is a Czech singer-songwriter. They first met in 2001 when she was just 13, but they developed a relationship six years later, during filming. Though they’re no longer a couple, they still tour together on occasion.

The gorgeously melancholic show, set in a Dublin pub, with some lively, foot-stompin’ Irish music thrown in, features a cast of 11 multi-talented, multi-instrumentalist actor/singer/musicians that comprise the orchestra and the chorus. But the crux of it all is a star-crossed love story.

Guy is a stalled street busker, about to give up altogether on his mournful music. Girl is a Czech immigrant street vendor. They’re both suffering from broken hearts, and that makes their musical collaboration all the deeper and more elegiac. There’s a palpable ache in their duets. With their friends as musical backup, they record a stunning demo CD. And then (maybe), their lives take off.

At the California Center for the Arts Escondido (CCAE), J. Scott Lapp is the artistic director of the new venture, CCAE Theatricals. The former artistic director of Temecula’s impressive Barn Stage Company, Lapp has international credits, and never shies away from a challenge.

“Once,” a quirky, intimate, moody piece, is definitely one of those, as is Lapp’s next musical production at CCAE, “The Light in the Piazza” (June 17-25) and next spring’s “Sunday in the Park with George.”

As director and movement co-designer (with music director David Lamoureux), Lapp displays his discerning eye and deft directorial touch. He has assembled a superb cast, more than half of whom are veterans of the show, several in the excellent Lamb’s Players production of 2018.

One performer who’s new to the musical is the marvelous Ana Marcu, who plays Girl. She pairs and connects superbly with Tom Frank as Guy. They have us rooting for them all the way.

In the cozy, 400-seat Center Theatre at CCAE, the pre-show concert features high-energy playing and the verve of the musicians’ sheer enjoyment of strolling and strumming and riffing. The instruments range from guitar (Frank and others), to piano (Marcu), to mandolin, hammer dulcimer, concertina, ukulele, melodica, accordion and various types of percussion.

The accents aren’t always convincing, but the set (Matthew Herman), enhanced by the lighting (Michelle Miles) looks authentic, as do the costumes (Janet Pitcher). The sound and projections are effective (though it’s difficult to discern some of the lyrics).

The heartbreaking but also heart-warming musical, which takes place over the course of just five days, shows how even brief, chance encounters can have life-changing effects. Look for and savor those moments in your own life.