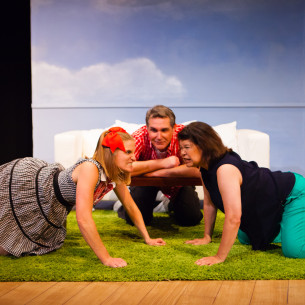 It was love at first sight. Once Greg met Sylvia at the park, his life changed completely. He was a middle-aged man with grown children, married for 22 years. But this was The Real Thing: the adoring, unconditional devotion he’d been looking for. Someone who really listened to and understood him.

Call it midlife crisis, if you will. Greg is hating his job. Clearly, he’s adrift, and Sylvia is the lifeline he didn’t know he was seeking. Now, he can’t think of anything but spending time with her, being playful with her and making her happy.

There’s only one catch. Sylvia is a dog. This cute canine does happen to talk, and she has some pretty witty things to say. But she’s antic and hyper and she’s driving Greg’s wife, Kate, out of her mind. Kate insists on calling the little mutt Saliva, instead of Sylvia. They glare at each other. Finally, Kate takes the problem to her psychiatrist, because frisky, mischievous Sylvia is destroying her marriage.

You wouldn’t think that this comical setup could be sustained for two hours. But A.R. Gurney’s irresistible 1995 play takes some surprising turns, and it’s very clever and comical, while addressing some serious midlife and marital issues. Nearly everyone can relate.

And at New Village Arts, the cast is so doggone delicious, you can’t help but yip and yap your enthusiasm.

Daren Scott is a mess of pent-up emotions as the enamored and obsessive Greg, and Saverina Scopelleti is perfect as his put-upon wife. Tony Houck plays three characters, each more hilarious than the last, from a macho downtown dog-owner to a prissy Upper East Side matron, to an ambisexual psychiatrist.

At the center of it all is Samantha Ginn as Sylvia, with a zillion real-dog moves and actions snuggled into a magnificent and manically athletic performance.

Director Kristianne Kurner keeps the pace brisk and the comedy crisp. The interactions feel real. The midlife disenchantment does, too. Folks young or old, dog-owners or not, will howl for “Sylvia.”

“Sylvia ” runs through June 28 at New Village Arts in Carlsbad.