“NOISES OFF” at Lamb’s Players Theatre

Aired on KSDS-FM on 4/27/18 RUN DATES: 4/6/18 - 5/20/18 VENUE:  Lamb's Players Theatre   “Noises Off” has “Nothing On.” That is to say, the wild and wacky 1982 farce by Michael Frayn, “Noises Off,” has a play within the play called “Nothing On.” Both are equally ludicrous. Together, they’re hilarious. We start out at a rehearsal for the cheesy comedy being performed by a 3rd-rate English theater company that tours to far-flung holes-in-the-wall. It’s the night before opening, and everything Read More →

KPBS AIRDATE:   FEBRUARY 4, 1998 History repeats itself.   And so does comedy.   To see the manic mayhem of a 17th century burlesque juxtaposed with a 20th century rendition is to see humor, theater and history in the making... Try a dose of Molière followed by a chaser of Michael Frayn. May the farce be with you... Read More →

“noises Off” > At The North Coast Repertory Theatre

KPBS AIRDATE:   JUNE 23, 1993 You know what farce sounds like? Frequently, like this. (sound of slamming doors) On the small, shallow stage of the North Coast Repertory Theatre in Solana Beach, there are seven doors and a double window. That's enough for a zany cast of nine to slam themselves into Read More →

“AT THIS EVENING’S PERFORMANCE” at North Coast Repertory Theatre 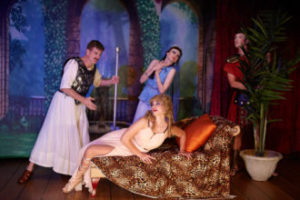 Posted at TimesofSanDiego.com on 7/17/17 RUN DATES:  7/12/17 - 8/6/17 VENUE: North Coast Repertory Theatre  “Comparisons are odorous,” Shakespeare’s malaprop-spewing Dogberry famously declaimed. Comparing Nagle Jackson’s 1978 trifle, “At This Evening’s Performance,” to Michael Frayn’s hilarious and brilliant “Noises Off” (as occurred in some promotional material) is both odorous and odious. (For the record, Frayn’s farce premiered after Jackson’s, in 1982, but he wrote an earlier, one-act version in 1977). The only thing these two theater works have in Read More →