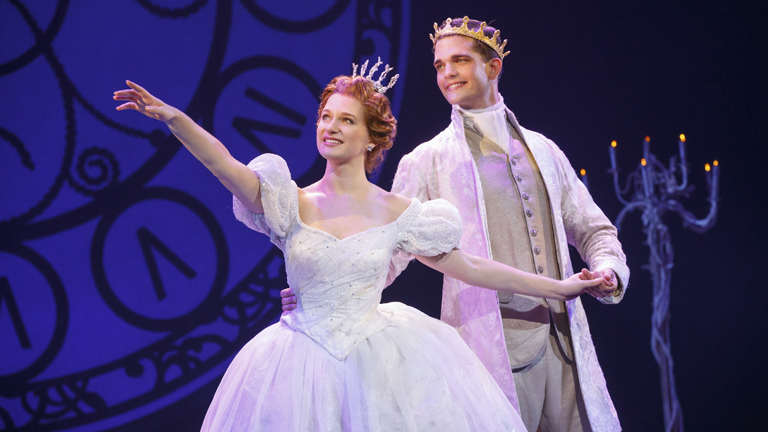 There’s a bit of magic in the Civic Theatre this weekend.

The national (non-Equity) touring company of “Cinderella” is in town… and it’s a winner:  elaborate sets, excellent sound and lighting, and a robust 9-piece orchestra.

The magic is in those spectacular costume transitions from glum to glam that both Ella and Marie the madwoman (who morphs into Fairy Godmother) undergo. The rest of the cast’s costumes are sumptuous – and numerous (designed by multi-Tony Award-winner William Ivey Long).

The musical, originally written for a 1957 live TV broadcast (it didn’t hit Broadway until 2013) isn’t one of Rodgers and Hammerstein’s best, though the book updates by playwright Douglas Carter Beane help make it timely and relevant – if that’s really necessary for a supposedly timeless fairy tale. So now, both Ella and her Prince show concern for the poor and homeless, as they strive to find their true self and purpose in life.

There are only a few moving or fun or romantic numbers in this one (most other R&H shows have just one clunker, and the rest are stellar): “In My Own Little Corner,” “It’s Possible,” “Ten Minutes Ago,” “Do I Love You Because You’re Beautiful?” and the amusing “Stepsister’s Lament.”

The singing is outstanding throughout, as are the choreography (originally by Josh Rhodes; Lee Wilkins for the tour) and the dancing (love those Leaping Lords of the court, and the acrobatic carriage Footman and Driver).

The leads are strong; Louis Griffin is an adorable triple threat as the naïve, protected Prince Topher, and as his unlikely bride, Ella, Tatyana Lubov has a sweet presence and a lovely voice – but dancing isn’t her forte.

The characters who could be comical aren’t, particularly Madame, Ella’s nasty stepmother (Sarah Smith); Marie, her Fairy Godmother (Leslie Jackson) and Sebastian, the Prince’s ‘keeper’ (Christopher Swan). They sing and act commendably, but considering the performers who preceded them (Fran Drescher, Judy Kaye, Jason Alexander), their roles could have been comically heightened.

As Charlotte, the more self-serving of the stepsisters, Joanna Johnson has to bear the whole show’s comic weight, but she doesn’t disappoint.

There were loads of little girls in the audience the night I was there (many of them in gowns and/or tiaras) – and they were loving it. As the Fairy Godmother tells Cinderella as she sends her off in the pumpkin-turned-golden-carriage: “This is for all the girls who didn’t get to go to the ball!”

So, grab your favorite little gal-pal and make her dreams come true. This weekend only.

Remaining performances are Saturday 12/2 at 2pm and 7:30pm and Sunday 12/3 at 1pm and 6pm at the Civic Theatre downtown