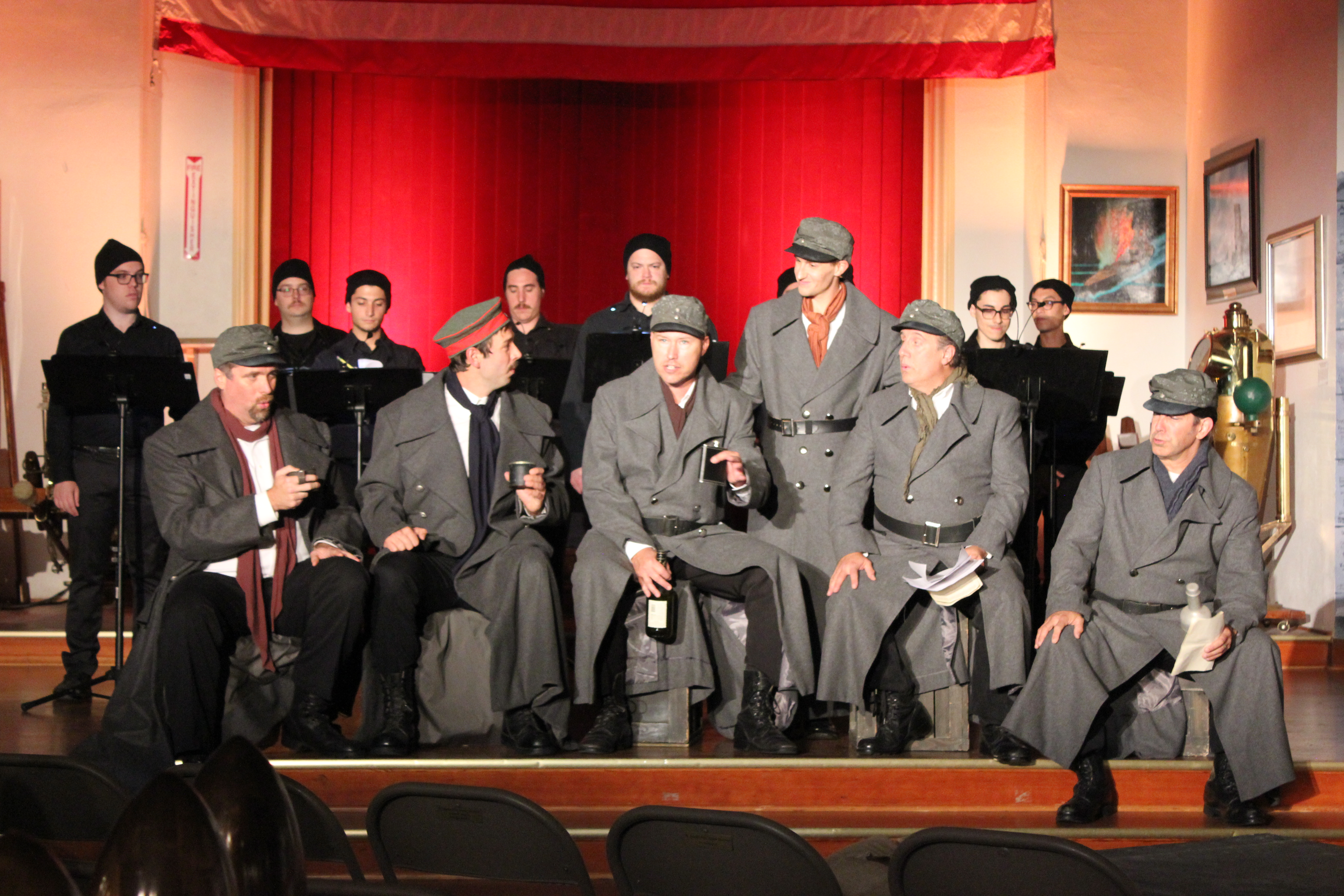 Enemies can be friends, even if only for one night.  In the middle of a war, they can pile out of their trenches and make merry together.

This isn’t a fantasy, or a metaphor. It really happened – on the battlefields in Belgium, in 1914. It was the beginning of World War I, and the Germans were facing off against the Brits.

One Christmas Eve, one side started singing, and miraculously, the other side joined in. Thousands of soldiers put down their arms, ventured into “no man’s land” and exchanged gifts, shared rum, played soccer – and helped bury each other’s dead.

And then, when the night was over, they went back to killing each other.

It’s a relatively unknown story (suppressed by the propaganda machine because it humanized war?), memorialized in a wonderful, heartfelt production called “All is Calm: The Christmas Truce of 1914,” by Peter Rothstein, with musical arrangements by Erick Lichte and Timothy C. Takach.

The tale is told through reading of personal letters and glorious a capella singing.

For the second year — hoping to establish this as a holiday tradition – Bodhi Tree Concerts is collaborating with the phenomenal choral group, Sacra Profana, as well as the San Diego Opera and the Veterans Museum of Balboa Park, which is the recipient of all proceeds.

I missed the performances last year, and only got to see a Sneak Peek this time around. But it touched – and nearly broke – my heart. Those letters from the trenches are gut-wrenching.

Some of the songs are familiar holiday melodies (“Auld Lang Syne”), some are known war tunes (“It’s a Long Way to Tipperary), and some are patriotic or sentimental.

While there is a laugh or two, it’s all about the wonder of this incredible, historical coming-together, when the “little people” exerted their good will and defied their horrific circumstances.

At least for the duration of this inspiring piece, we can all believe in our common humanity and the possibility of peace.

This moving story should be better known. And this production must be seen.

It plays for one weekend/four performances only (November 17-19). Tickets are reasonable ($30, $15 for students and military) and the singing and story are unforgettable.

This soul-stirring effort is performed in the perfect location: the Veterans Museum at Balboa Park (2115 Park Blvd.), adorned with flags and provocative posters from the first World War. That was supposed to be “the war to end all wars,” remember? If only….

For tickets and further information, go to bodhitreeconcerts.org