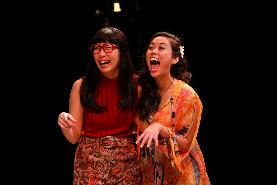 The politics of 2019 may never be forgotten. The year of divisiveness — and impeachment — left an indelible mark.

Here in San Diego, theater made its own mark.

It was a strong year on local stages — many new plays and musicals — which are catnip to local audiences. But older plays — like Tony Kushner’s daring “Angels in America” (Cygnet Theatre) resonated strongly in the present moment — especially since the villain of the piece, legal wheeler-dealer Roy Cohn, was, years ago, the lawyer/mentor of Donald Trump.

There were so many powerful productions in 2019,  I had a hard time choosing the Best of the Best, and there were often ties for the top spots.

“Cambodian Rock Band,” in a splendid co-production among the La Jolla Playhouse, Oregon Shakespeare Festival and Portland Center Stage, is a marvelous play with music written by UCSD MFA alumna Lauren Yee, inspired by the L.A.-based American/Cambodian rock band, Dengue Fever. It’s set mostly during the horrifically brutal regime of the Khmer Rouge. But at its heart, it’s an aching father-daughter story (a fairly rare occurrence in the performing arts) about family, honesty and survival. As directed by Chay Yew, Joe Ngo and Daisuke Tsuji were mesmerizing.

Diversionary produced the world premiere of “The Hour of Great Mercy” by Miranda Rose Hall. Set in a dark Alaskan winter, the play concerns a family tragedy, a priest in a crisis of faith (and sexual identity), and the reunion of two vastly different, estranged brothers, brilliantly played by Andrew Oswald and Tom Stephenson. A beautiful, touching play, and a heartfelt production, expertly directed by Rosina Reynolds.

“THE VIRGIN TRIAL” by Kate Hennig, directed by the gifted Rob Lutfy, starred magnificent 20 year-old Olivia Hodson as young Queen Elizabeth I, already feisty, indomitable and very much in control.

“ANGELS IN AMERICA,” Parts 1 and 2, exquisitely cast (by the redoubtable Sean Murray), with standout performances by Alex Bodine as a dying young man in the early days of the 1980s AIDS crisis; James Newcomb as the monstrous manipulator, Roy Cohn; Rachael Van Wormer, as a pill-popping, neglected wife, a fantasist who might see things most clearly; and Rosina Reynolds in multiple roles, including a Rabbi and suspected, electrocuted spy Ethel Rosenberg.

“As You Like It,” a pastoral comedy that also focuses on the grim life of exile, was strikingly designed and astutely directed by Jessica Stone, with Meredith Garretson, doing stellar double-duty as the strong-willed Rosalind and handsome young man, Ganymede. The production alluded powerfully to current issues of feminism and gender politics/fluidity.

“Life After,” a 2017 chamber musical, centers on a 16 year-old who’s just lost her famous father, excellently played by Sophie Hearn and Bradley Dean. Almost the entire story unfolds inside Alice’s head, as secrets and lies come to light. A meditation on love, loss and forgiveness, the piece, directed by Barry Edelstein, couldn’t have gotten a more gorgeous production.

“Gabriel,” by English playwright Moira Buffini, is set on the island of Guernsey during the Nazi occupation. In this West coast premiere, a mysterious man washes up on the beach, and the residents of one house are forced to take sides and reveal secrets in solving the question of his identity. Christopher Williams helms a stellar cast, with especially noteworthy performances by Richard Baird, Jessica John and 11 year-old Catalina Zelles.

“Amadeus,” written by Peter Shaffer and directed by Richard Baird, took us further back in history for a fictionalized version of the story of Mozart and Salieri, a genius unknowingly pitted against someone who knew, by comparison, he was at best a mediocre composer. This wonderful production, gorgeously costumed by Elisa Benzoni, featured terrific performances by Rafael Goldstein and Tony Amendola.

In this moving drama, a ‘spinster’ seamstress in 1905 New York is beset by disappointments but she soldiers on with strength and perspicacity. Under the meticulous direction of Melissa Coleman-Reed, Tamara McMillian gave a wonderful performance, abetted by castmates Cashae Monya, Tom Steward and Taurian McLeod.

This wild, award-winning musical about an East German botched sex-change operation features a book by John Cameron Mitchell, based on some of his own life story, and rockin’ music and lyrics by Stephen Trask. Diversionary, the third-oldest LGBTQ theater in the country, and its mega-talented artistic director, Matt Morrow, gave it a spectacular, high-octane turn, filled with humor and heart, and grounded by the charismatic nonbinary actor Jeremy Wilson, superbly paired with Cashae Monya. The makeup alone (by wig-wizard Peter Herman) was worth the price of admission.

Moxie snagged the West coast premiere of this deliciously political, feminist, British backbiting dramedy that hypothesized what the weekly meetings between Queen Elizabeth II and Prime Minister Margaret Thatcher, might have been like, over the course of 11 years. Under the scrupulous direction of Kim Strassburger, the duo was brought to life by four actors, representing alter-egos and different points in time. Sandy Campbell was killer as the older Queen, and Max Macke was hilarious as a wide array of husbands, lovers, politicos and functionaries in the women’s lives.

‘There are only two people in the country qualified to replicate Jerome Robbins’ iconic choreography of this beloved 1957 Leonard Bernstein/Stephen Sondheim musical, and Moonlight snagged one of them: Hector Guerrero (and lucky us! — he’s back to direct/choreograph “A Chorus Line” at the Welk Resort Theatre in January). The dance ensemble was the best ever seen on a local stage. The story, a brilliant 1950s New York City riff on “Romeo and Juliet,” remains eternally timely, especially its emphasis on gang warfare; nasty, name-calling rejection of immigrants (Puerto Ricans); and police brutality. The two lead women were particularly potent: New York-based Courtney Arango as the fiery, dance-happy Anita, and 18 year-old recent high school graduate Bella Gil lovely, sweet-voiced and heartbreaking as the innocent Maria. Director Steve Glaudini made every emotional moment real and believable. A triumph of a production.

These two superb musical-dance productions practically bookended the year. Both were directed by Kirsten Chandler and choreographed by Jill Gorrie, an exceptional pairing. “Crazy for You” has an incredibly silly story. But it’s got that resplendent Gershwin score, chock-ful of classics, and grandly sung and danced by Jeffrey Scott Parsons and Taylor Mettra.

“A Christmas Story” is the 2012 Pasek/Paul musical adaptation of the 1983 cult film, set in 1940 and focused on a coveted BB gun that a 9 year old wants for Christmas. Steve Gunderson is avuncular; Jake Millgard and Heidi Meyer (also a stupendous Aldonza in SDMT’s earlier production of “Man of La Mancha”) gave expert performances as the parents of young Ralphie,  skillfully played by JP Wishchuk.

San Diego was ahead of the gender-parity curve this year; seven of the above-mentioned writers and six of the masterful directors were women.

A few other notable productions this year: “Almost Famous,” “The Tale of Despereaux” and “Ebenezer Scrooge’s Big San Diego Christmas Show” at The Old Globe; “The Coast Starlight” and “Diana” at the La Jolla Playhouse; “Sweat” and “33 1/3 House of Dreams” at San Diego Rep; “American Buffalo” and “An Experiment with an Airpump” from Backyard Renaissance Theatre; “Million Dollar Quartet” from Lamb’s Players Theatre; “A Bright New Boise” and “Frankie and Johnny in the Clair de Lune” at OnStage Playhouse; and “Everybody Black” at UCSD.

Here’s hoping that 2020 provides us with another compelling and inspiring year of theater. There’s no question that San Diego has the requisite talent and ingenuity