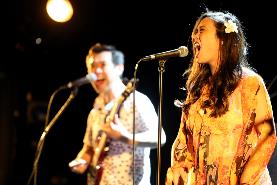 For the country, 2019 was a year of discord and disunity. But on San Diego stages, there was a good deal of harmony and collaboration.

Still, it wasn’t a very political year, theatrically speaking — at least, not in terms of current events.

Some of our most incisive and memorable dramas — and even musicals — harked back to the past. The audience was left to draw their own parallels to the present.

For example, one of the most thrilling productions of the year — “Cambodian Rock Band,” a co-production among three national theater companies, presented at the La Jolla Playhouse, was set mostly during the brutal soul- and arts-crushing regime of the Khmer Rouge.

Our two highest-profile local world premiere musicals — “Almost Famous” at The Old Globe and “Diana” at the La Jolla Playhouse — were also set in the 1970s.

All the strongest dramatic productions of the year — the new play, “Hour of Great Mercy” at Diversionary; “Angels in America” at Cygnet; “Gabriel” and “Amadeus” at North Coast Rep; and “Intimate Apparel” at New Village Arts — were set in the past.

Reynolds and Baird did dazzling double duty this year, as noteworthy actors and directors.

Women repeatedly took center stage and lead-character roles in shows such as “The Virgin Trial,” “Handbagged” and “Intimate Apparel.”

Perhaps the present was just too disturbing, and the future uncertain and unnerving. Maybe this accounts for the apparent escape to the past. Not to say that those earlier times were all good ones — but at least they’re over, and some may serve as cautionary tales for today.

Here’s to stability and solidarity in the Roaring ‘20s to come… and to resolutions to see more theater in the new year.