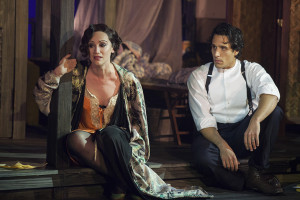 “RAIN” at The Old Globe 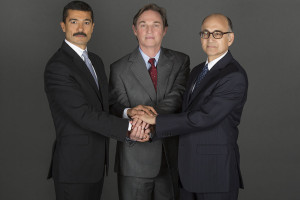 “CAMP DAVID” at The Old Globe

Aired on KSDS-FM on 5/27/16 RUN DATES: 5/13/16 - 6/12/16 VENUE: The Old Globe   It’s a remarkable coincidence: two new plays at our two Tony Award-winning theaters, both based in fascinating historical fact.  One is all surface, no substance. The other is almost all substance, maybe too much, with occasional comic relief. One has no three-dimensional characters; the other is all about character. And ironically, the drama about politicians making policy is more suspenseful than the so-called noir thriller.  The Read More → 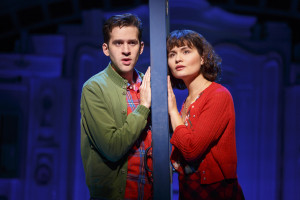 “AMELIE” at the Ahmanson Theatre L.A.

Aired on KSDS-FM on 12/30/16 RUN DATES: 12/4/16 - 1/15/17 VENUE: Ahmanson Theatre, L.A.   How do you take a gorgeously shot, thoroughly cinematic French film and adapt it for the stage? Making the delightfully offbeat 2001 movie, “Amélie,” into a musical is actually less of a challenge than capturing the stunning look and sensibility of the source. The new musical, “Amélie,” premiered in 2015 at Berkeley Rep, and after some tweaking and cast changes, it’s now running at the Read More → 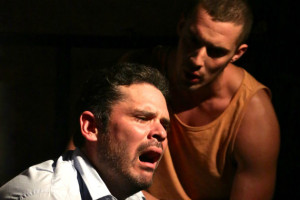 “SEVEN SPOTS ON THE SUN” at InnerMission Productions

Posted at TimesofSanDiego.com on 12/11/16 RUN DATES:  11/26/16 - 12/10/16 VENUE: InnerMission Productions   Neither magic nor ghosts, prayer nor healing power can eradicate the ravages of war. In the fictional Latin American town of San Ysidro, the battles aren’t with “the neighbors to the north.” This is a civil war (though there’s nothing civil about it). And the damage devastates every small village, every loving couple. In Martín Zimmerman’s “Seven Spots on the Sun,” we meet two such couples, the Read More → 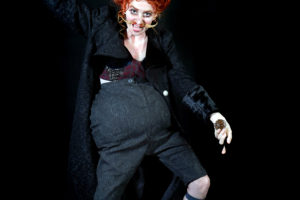 Aired on KSDS-FM on 6/2/17 RUN DATES:  5/18/17 - 6/18/17 VENUE: Cygnet Theatre It’s a weird, wicked creation, born and nourished by sheer imagination. In 1845, psychiatrist Heinrich Hoffmann wrote “Struwwelpeter,” or “Slovenly Peter,” as an instructive picture book for his three year-old son. Despite the sinister nature of its grisly fairy tales, where violent death is the upshot of every story, it became a best-seller. Naughty or nasty children and a pair of abusive, neglectful parents suffer dreadful Read More → 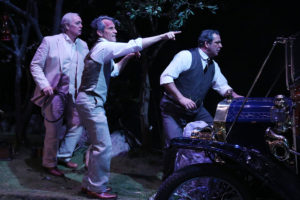 “CAMPING WITH HENRY AND TOM” at Lamb’s Players Theatre

Aired on KSDS-FM on 3/20/18 RUN DATES:  2/16/18 - 3/25/18 VENUE: Lamb's Players Theatre History repeats itself again. Though “Camping with Henry and Tom” was written in 1993, and is set in 1921, it feels eerily up-to-the-minute. Playwright Mark St. Germain enjoys tinkering with the past, putting real characters in imagined contexts. This time, he visits automobile industrialist Henry Ford and inventor Thomas Edison, on their regular summer camping trip in the Blue Ridge Mountains. In 1921, they did, in fact, invite Read More →