“THE MADRES” at Moxie Theatre 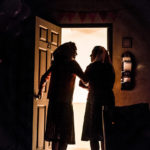 Aired on KSDS-FM on 6/1/18 RUN DATES: 5/13/18 - 6/10/18 VENUE:  Moxie Theatre “The Madres” is perfectly timed to this #MeToo moment. The rolling world premiere, written by Stephanie Alison Walker, is part of the National New Play Network. It opened first in L.A., then moved to Chicago, and heads to Austin after its San Diego premiere. The “Dirty War” is raging in 1978 Argentina. People are being ripped from their homes—murdered, incarcerated or ‘disappeared.’ Before it’s all over in Read More → 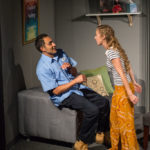 Posted at TimesofSanDiego.com on 1/23/18/ RUN DATES: 11/10/18 - 11/11/18 VENUE:  Moxie Theatre  First impressions and false assumptions. Lucia (she insists it be pronounced lu-SEE-ya), a Mexican-born Chicago writer (with one novel to her name), is newly arrived in Hollywood to work on a TV drama centered on a Latina detective. Abel (that’s ah-BEL) is the night janitor in the building. When they meet, she speaks to him in Spanish, assuming he’s monolingual. To her surprise, he responds in unaccented Read More →

“THE TAMING” at Scripps Ranch Theatre 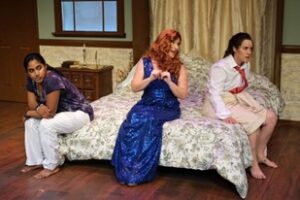 Posted at TimesofSanDiego.com on 4/20/22 RUN DATES:  4/5/22 - 5/1/22 VENUE:  Scripps Ranch Theatre An ultra-conservative political operative, a left-liberal social media influencer and a bespangled beauty queen are locked in a hotel room. Sounds like the beginning of a joke. At least two of the three trapped women have hangovers. The third, the Miss America finalist from Georgia, who gave the other two roofies, kidnapped them, took away their phones (horrors!) and the conservative’s suit pants… insists that they Read More →

“menopause The Musical” At Diversionary Theatre

Pat Launer KPBS-FM Airdate: April 06, 2007 Most women wouldn’t exactly find menopause something to sing about… unless they’re singin ’ the blues. But writer/producer Jeanie Linders thought there was plenty of humor to wring out of The Change. So, gearing her show to her 38 million Baby Boomer comadres , she took two Read More →