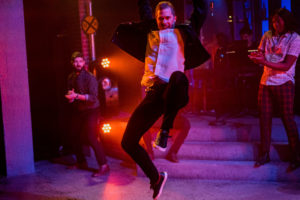 Aired on KSDS-FM on 2/15/19 RUN DATES:  2/2/19 - 3/10/19 VENUE: New Village Arts Lyricist Jerry Leiber and composer Mike Stoller wrote some funny, rockin’ and poignant pop songs, with 70 chart hits in the ‘50s and ‘60s. They had a major impact on early rock & roll, bringing R&B and boogie-woogie into the mix. Some of their songs, like “On Broadway,” “Stand By Me,” and “I’m a Woman,” have become classics, but some just sound silly today, like Read More → 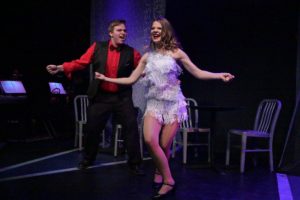 Aired on KSDS-FM on 5/18/18 RUN DATES: 5/4/18 - 6/9/18 VENUE:  OnStage Playhouse San Diego is laying out the welcome mat for Jerry Leiber and Mike Stoller. The legendary songwriting team is being celebrated at two local theaters within a year’s time. “Smokey Joe’s Café,” a Tony Award nominee and Grammy Award winner, features three dozen of the pair’s Rock ‘n’ Roll and Rhythm & Blues classics, like “”On Broadway,” “Stand By Me” and “Kansas City.” Leiber and Stoller were Read More →

KPBS AIRDATE: July 18, 2003 There are classic musicals and there are music classics. No one would consider "Smokey Joe's Café" a classic musical, but this revue, now playing up in Vista at Moonlight Stage Productions, features a dance-happy nostalgia-trip of early rock 'n' roll songs. There's no story, just an impressive playlist of nearly 40 tunes penned by the prolific, groundbreaking, Grammy-winning duo of Jerry Read More →

“curtain Calls” Do Not Fuggeddaboudit…

By Pat Launer www.sdtheatrescene.com 10/20/04 This week, the theater covered myriad themes: From immigrant "Souls" to Strindberg "Dreams." Political issues made raucous noise And we witnessed the rise of the Valli Boys. The Joisey Boys are in town -- and it's gonna be pretty hard to ignore Read More →

By Pat Launer 7/15/03 This week had plenty of theater to choose: From Moonlight and Starlight, the Blitz and the Muse. From yarmulkes to blue suede shoes, Rock 'n' rollers to wandering Jews. And a lot about love, sprinkled with laughter In two at the Fritz and "Before/After." Read More →

Theatre Preview: The Kirstens And “alice In Modernland”

Published in KPBS On Air Magazine November 2000 Watch out! You're about to fall down a rabbit hole. You are now entering the dark, dank underworld of Modernland. Nothing is as it seems. Nothing is what you expect. This is about Sledgehammer Theatre, after all. "I always hated that singing flower crap," Sledge artistic director Kirsten Brandt says dismissively of the Disney version of Lewis Read More →