“QUEENS” at the La Jolla Playhouse

Aired on KSDS-FM on 7/13/18 RUN DATES: 7/3/18 - 7/29/18 VENUE:  La Jolla Playhouse One brutal line – among many – stands out in Martyna Majok’s “Queens”: “You’re either the boot or the back.” In the intense drama about immigrant women, a high price is paid by everyone who leaves or is left behind. When you’re in survival mode, choices must be made, whether to be pushed to the bottom rung, or step on others to advance. Skipping back in Read More →

Center Stage with Pat Launer on KSDS JAZZ88 AIRDATE: JULY 17, 2009 New ventures are always risky, especially in tough times. This week saw the debut of a new play and a new theater company. As is usually the case in these instances, both are works in progress. Common Ground Theatre, which has been in Read More →

KPBS AIRDATE:  October 06, 2006 White men, black women. When each group gets together for a ritual experience, sparks inevitably fly. The assemblages couldn’t be more different, though you could say ‘trash’ unites them. “Middle-Aged White Guys” features one seriously low-end, trashy family. And “Four Queens - No Trump” introduces a quartet of middle-class African American women assembled for their weekly game of bid-whist – and Read More →

“movie Queens” At The Diversionary Theatre

KPBS AIRDATE: May 11, 1994 &gt; There are more than just "Movie Queens" onstage in the play of the same name at Diversionary Theatre. All the men fairly fly across the narrowed boards of the fine new Diversionary space. But this piece isn't about men. It's about two fading aging stars of the thirties silver screen who once clawed each Read More → 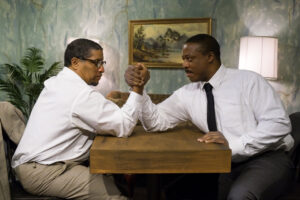 Posted at TimesofSanDiego.com on 3/2/21 RUN DATES: 2/26/21 - 3/13/21 VENUE:  Streaming from Point Loma Playhouse In an arm-wrestle challenge between civil rights icons Martin Luther King and Malcolm X, who do you think would win? If your curiosity is piqued, you should check out “The Meeting,” Jeff Stetson’s 1987 hypothetical drama. The two greats never really had a strength-competition, or even a conversation. They only crossed paths once, when they were both in Washington D.C. to watch the Senate Read More →